Some experts of the game argue that it was not the right thing to do on part of M S Dhoni’s. Everyone who has seen the replays knew that Bell should have been given out considering the rules of the game and considering that Bell initially ran for the run and then when Morgan stopped him from running, he simply refused to return to the crease and instead opted for moving along with Morgan towards the pavilion. After seeing the replays, my opinion was that Bell thought about going back to the crease but by then it was too late to go back, so he acted in a way which was the most convenient, just pretend as if the only thing that he knew was that Tea had been taken.

What to say about Dhoni? Such a gentleman of the game! I seriously don’t know why he would want to withdraw the appeal. Yes, one reason could be to gain the good will of the crowd and the English team, but is he there for gaining all this? One would be tempted to say that his first objective is to play the game and propel India to a victory and secondly if someone does not play within the rules of the game, then to act in a manner which will put forth the implementation of the rules. 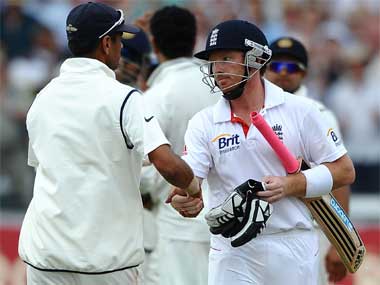 But in this case, just because Bell did a misjudgement, Dhoni shouldn’t have acted in the manner he did, considering that senior players in the team like Dravid also looked upset during the post day news conference. The decision should not, but can have an impact on the morale of the players and in fact it did to some extent seeing the body language of the players in the third session.

I am not saying that the result would certainly have been different if Bell would have been given out then, but then cricket is a funny game and you never know what could have transpired in case he was given out. It was baffling to see some experts like our own Sourav Ganguly believing that what Dhoni did was in the spirit of the game, considering the fact that what Sourav Ganguly did by taking his shirt off was totally not in the spirit of the game.

It is similar to saying that Sachin Tendulkar ran himself out because he thought the fielder wouldn’t throw the ball towards his end and therefore he continued running. But do you buy this argument? Having said that,the English batsmen played wonderfully well to achieve such a score.

Let us know below whether what Dhoni did was right in your opinion.