What a thorn in bush she is turning out to be for the UPA government! As if the Anna Hazare Hooplah, along with 2G scam was not enough at the national level, Mamta Banerjee seems to be putting our Indian government into an odd position even on an international platform. 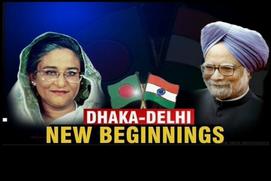 What amazes me the most is the timing of the lady. It seems quite improbable that the issue regarding sharing of the Teesta river waters with Bangladesh wasn’t discussed with her initially and if she was so opposed to the idea then why did she, initially agree to accompany PM on his visit. If this is not bad politics then what is!

Mamta Banerjee has been famous over the years for her irrational and hedonistic behaviour. But such kind of politics is highly deplorable considering the impacts it could have on India at the global level and the new beginnings might turn really sour.