I was watching this Mango Fruti advertisement in the morning where the guy is very shy and is unable to express his feelings to a girl in his college whom he likes and then on his convocation day he finally asks the girl to share his Fruti.

I am sure many might have seen this advertisement and I am sure that many amongst us might have encountered the same kind of dilemma of deciding on whether to approach a girl with all our feelings or whether not to do the same with the fear of getting rejected.

On the other hand there are some who cross the line and resort to means which might threaten the very integrity of love. The other day, I was talking to a couple of guys after giving one of my lectures on relationships and they were telling me how girls, at times, have not accepted their proposals even after being pursued and how they went about doing it. 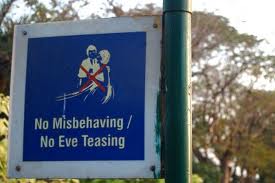 The stories ranged from following girls on bikes to at times whistling in order to attract their attention without being really aware of the consequences of their acts. For those who do such things, they come under the purview of the law under the eve-teasing offense, and can be booked for such an act. For the girls who are made to go through this, her pysche might get affected by the very act and can have grave social consequences for her and her family.

While it is good to express one’s feelings towards a person, one should always remember that there is a very fine line between expressing love and intimidating a person. Thus, it becomes extremely important to ensure that one doesn’t cross this line and delve into indecent acts.

All Sids out there, you must make a note of very essence of love and the responsibilites that come along as a part and parcel:

“Love is a very beautiful emotion. It is extremely important to understand the very meaning of love and it must be differentiated from the vices such as lust and madness. On one hand where it leads to positivity and a feeling of belongingness, on the other hand it can lead to misery and destruction in case one’s proposal is not accepted and in case one decides to cross the line.