Today, I was watching this show Satyamev Jayate and Aamir Khan drew this comparison between an Atom Bomb and an Agarbatti. He was talking with respect to the Dowry practice that is so prevalent in our societal set up.

People who go about pressing people for dowry seem to have forgotten the very basic values that, once upon a time, used to define the very essence of the Aryan culture in which we take great pride while browsing through our History books.

They seem to have forgotten that in Ancient India, the guy’s family used to give gifts to the girl’s family in order to get the right of bringing the girl to his own family. Even today, in many North Eastern states, similar practices are followed. 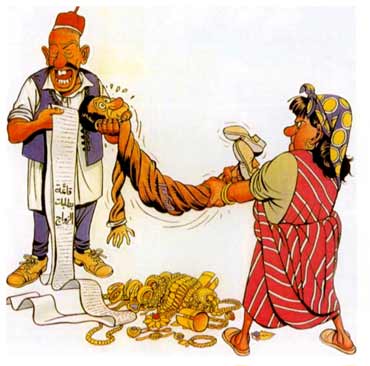 Some people try to justify the practice citing that it is a part of our social norms like so many other traditions and rituals. They also cite the examples of so many who would go to any extent to have lavish weddings for their daughters.

There is nothing wrong in wishing good for one’s daughter but not at the cost of ignoring the very basic values which are extremely significant when it comes to the girl spending a happy and a fulfilling life with her partner.

My advice to all the parents out there:

“Please do not go on compromising when it comes to giving dowry or fulfilling the wishes of the guy’s side.