On one hand where Bareilly, my current refuge, was busy partying on Sunday night, on the other hand there was something dreadful that was about to happen in a place called Aavlan, a place not very far from the city.

A group of kanvariyas, known for their devotion towards Lord Shiva, and who become quite visible during the season of Sawan, were totally engrossed in their enchantments when the communal bug hit them. 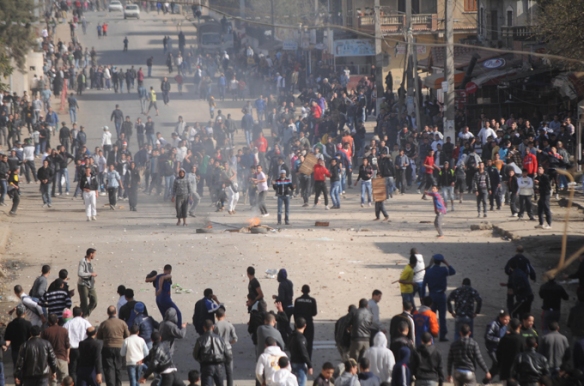 As the word goes, continuing with their over-the-moon celebrations, the group didn’t realize that they were crossing a mosque where the muslims of the area were all prepared to break their fast, carrying on with their tradition of Ramzaan.

On being requested by the Muslims, the kanvariyas refused to tow down their celebrations and the noise emanating from the same. An argument followed which soon took the shape of a skirmish, and resulted in injuring and probably killing a number of the kanvariyas and the Muslims present there at the very moment.

What followed after was a toned down replica ofthedreadful Mumbai riots and many such riots that our country, of late, has become so used of beholding.

The administration in the district was quick to respond. In this effort a number of policemen and the SP of the city got injured. Surely their effort needs to be applauded for having prevented a major catastrophe from taking place and for imposing a curfew in the whole area.

But one question that has had and is continuing to marr the image of our country as a country with unity in diversity that India is so proud of propagating everywhere around the globe, is why do we become so intolerant when it comes to propagating or practicing our religion?

Is it because of the manifestations of our biases towards the other sections/religions in our country that seem to find its way out on such occassions or is it because of the increase in intolerance and loss in secular character of our citizens that seems to multiply on such critical moments?

Whatever be the reason, one thing that is absolutely essential for a country like India to tread its path of transition from a developing to a developed nation, is to maintain an environment of peace and stability, in order to be able to develop and grow.

The people or the hooligans who tend to be involved in such activities have no regard whatsoever for our nation or her assets. As a result, we end up losing not only the valuable infrastructure but also the precious lives of our youth, who tend to play a major role during such riots, and who have a potential of becoming productive citizens of our country.

Such loss is completely irreparable. It also ends up creating bad feelings on both sides of the community and serves like a ticking bomb ready to explode sometime in the future.

What needs to be done is to increase contact between the two communities and bring them on a platform where they can interact and try to get rid of their stereotypes and prejudices that have developed over time.

Schools and parents need to play a major part in this effort. They themselves might have gone through harsh experiences but they should make sure that they don’t end up imposing their biases on their own children and leave them to suffer in the times to come.

After all, its not the religion that causes all the trouble. Its the people themselves, its us, who are the sole and the only cause of such conflicts.

And what’s more important is to realize that we don’t really need to go far in order to find our answers to the puzzle and to take note of what the father of our nation once said: “be the peace you wish for the world“.

4 thoughts on “Rioting for Religion”