I couldn’t help but write something on what I just saw. No! it isn’t reading about the fastest man on Earth, Usain Bolt; it isn’t even about Yuvi’s selection in the T-20 squad, it’s about a photograph that has been posted on Fb by one of my very dear friends from school, Anna.

It seems, he has taken a leap back into those lanes of memory where we would all always want to return to, and that is our childhood days. With a carefree attitude and nothing to bother our minds, we used to fly as if there was no tomorrow.

Nothing seemed to perturb us more than not being able to play during the sole PT period in our school. With the few amongst us, who indeed wore a watch in those days, all eyes used to be hooked at when the bell would ring and when we would rush out of our classes to fulfill the very reason of coming to the school on the very day. 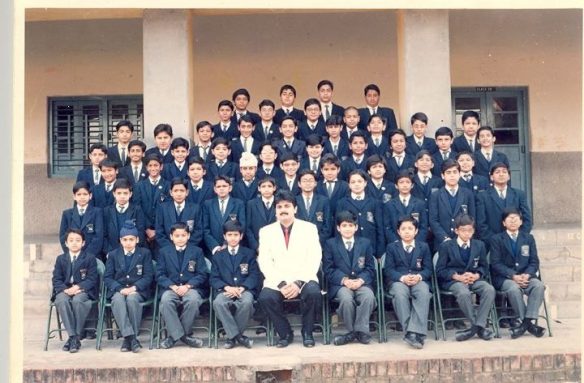 Sometimes, when we think about our golden days, we all tend to become very nostalgic. At the end what stares us in our faces is the blunt reality of today’s competitive World which, in a way, forces us all to become a part of the rat race.

How often, we tend to move on with our lives, without really caring to give a thought about those whom we are leaving behind. We all tend to evolve as a person and as a professional.

But there are few amongst us who tend to hold on to our origins, and they are the ones who play that critical role in establishing that link which was lost because of the others who hadn’t cared about maintaining the same.

And one such person is Anna. A gem of a person from heart and a friend whom you can always look upto, he indeed represents the very essence that my school St. Francis’ College stands for.

On second thoughts, I haven’t spoken to him for a long time now. But who’s stopping me to? Fb, here I come :).

Source for Image: School pics (by the way, can someone tell where am I in this pic? 😀 )