For the past couple of days, my to be better half has been complaining about me not being able to give her much time. On top of that, whenever I decide to crib something here, she says, that it’s on topics such as life and not wife, which if I were to write on, would in all probabilities make her happy ;).

Though, even the Gods wouldn’t dare to tread this path, today is a day where I take the liberty, of course at my own risk, to throw myself in this short but extremely significant journey, where I would try to discover the very significance of the word wife :D.

A man’s interaction with a woman starts the very moment he announces himself on the floor which we call World. Though, the woman in his life is not a wife, but this very interaction with his mother, is instrumental in framing his conception of a wife.

As a natural progression of cognitive development, he slowly but surely realizes what a wife can and would certainly do to him, or to put it differently, how a wife would be able to make that quintessential difference that he had been waiting/or not waiting for so long ;).

As Shahrukh Khan has famously said in one of his dialogues from his movie kuch kuch hota hai, a man indeed tends to bow down in front of the three most important women in his life, namely: devi ma, ma and biwi.

On getting married, a mumma’s boy is expected to become a biwi’s guy, if I can call it so :). He is supposed to cater to each and every need of his wife, and the onus of deciding whether the so called created need is indeed legitimate and logical, lies on none other than the person whose need is supposed to be catered to. 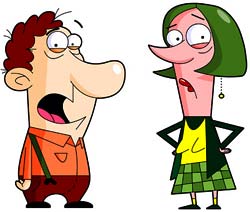 So far, it seems I have been talking about just one aspect of the word wife, and that too in not a very positive manner. But folks, I must tell you that there is another side to this story which truly deserves a lot of praise and respect.

A wife in all senses of the word is truly a homemaker. For if she was not there, a house would ever remain a house. She is the one who tries hard day-in-day-out to turn a house into a home.

She is the one who not only takes care of the husband, but also the entire family of her husband. And mind you, it’s not easy to come into a household, which is totally new to your expectations and give in your 100%.

Even after all the difficulties and cultural shocks, she makes sure that her husband is happy. Sometimes I wonder how can wives be so dedicated and selfless?

On second thoughts, instead of wondering how she is able to do so, I guess, I would be better off in bowing myself as Mr. Shahrukh Khan has apltly portrayed in his blockbuster, in front of the woman, who is truly, amongst the three very important ladies in the life of any mortal who happens to visit this planet Earth :).