My fiance calls me crazy for this. My parents get really worried when I resort to such ways. My friends think that what I am doing can turn out to be a total disaster in case the God decides to undo the blessings and luck that He supposedly is showering upon me. In short, they all think that this is very uncalled for and I should stop doing this on an immediate basis.

Well, I am talking about the fascination that I have with traveling around the country in my car, be it alone or with a couple of friends. This time around, it happened to be a very dear friend who decided to give me company.

Like all the other trips that I have undertaken so far, this one too didn’t have a plan. When I left my place to pick up this friend of mine from his, Kanpur was the city that seemed to have caught my attention, courtesy the wonderful campus of the college in which I happened to have spent the precious few years of my life.

By the time I reached his house, the plans had taken a 180 degree turn and the pleasure associated with spending some time in the vicinity of lush green woods seemed to have taken me in its grip. So, we decided that we should go to Dudhwa National Park in the Lakhimpur Kheri district, which is also known as the sugar bowl of UP, and is around 240 kms from Lucknow, the city where I happen to be living at the moment.

And there we were driving on the Sitapur road, which by the way has developed into an excelllent highway and when I say excellent it means, one can average around 80-100 km/h on the same for a stretch of around 80 kms or so.

As we were about to reach a destination where we supposed to take a right turn for the national park, an idea of going to the hills struck me. I looked at my friend and gave him a smile. The excitement could very much be seen in my eyes. Having known me for the past couple of years, he knew what I was upto. Fearing the odacity of the plan that I could have had in my mind, he said, “Don’t even think about it. We are going to Dudhwa.”

Though I wanted to bring my idea into reality, yet I had no issues when it came to spending some time in the woods. After reaching the national park, we opted for a Safari, which in many ways turned out to be a pleasant experience with us driving amidst the woods in a Gypsee with trees towering upon us from both the sides. We were lucky enough to see a couple of wild animals, considering that we had reached the place in the evening.

After an hour and a half long Safari, we decided to munch upon some delicacies in a canteen which is located within the premises of the park. I could see the hills right in front of my eyes, while I sat there sipping on a cup of tea.

I looked at my friend again, who by the time had understood that I had made up my mind on something which is not going to go away so easily from my mind. “Ok! Where do you want to go now?”, he asked.

“I was wondering whether we should go to Nainitaal. It is not very far. I guess it is around 350 kms or so. Right now, it is 7:30 p.m. I am sure we will reach there by 12:30 a.m. We will take the Pilibhit route which is quite decent when it comes to the condition of the roads. And we will bid good morning to each other in the beautiful Naini lake. What say? 😉 “ I finally revealed the deliberation which had been going on in my mind for the past couple of hours. 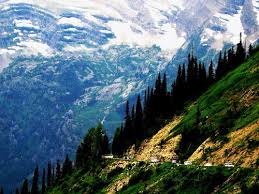 And there we were, once again all set to hit the road with the back packs that we were carrying along. It took us around 6 hours to reach a place called Katgodaam (from where Nainitaal is just 35 kms away) much more than what he had expected, courtesy a very bad patch of road that we encountered in the path that we had decided to tread.

By then, we were completely exhausted. Good sense prevailed and we decided to find a place where we could sleep for at least couple of hours. As if, God had finally decided to ditch us. We were unable to find a room in the hotels, as all were full, as it was the weekend and not many people in the World travel in the same unplanned manner as we do.

Having no other option, we decided to sleep in the car itself. It was only after 2 hours that we realized that we were sleeping in our car which was parked on the road itself. It was already 4 a.m. We knew that if we wanted to see the first rays of the sun in Nainitaal, we better leave then.

The beautiful valley along with the curves associated with the path that leads to any of the hill stations seemed to have rejuvenated both of us and made our ascent to the top one of the most pleasurable and serene of experiences that I have ever had.

It took us another hour and a half to reach the hill station and there we were sipping again on a cup of tea along with a plate of band makkhan at the Naini lake looking at the sun showering all its energy and blessings on us.

After having our breakfast at the lake, we drove towards a hill top totally engulfed by the clouds which seemed to have traveled from the heavens just to meet the stretch of mountains.

It was getting colder and we had of course not carried along any woolens, for in the first place we had no plans of going to a hill station. Good sense prevailed once again and more than having a good time, an idea of consuming some alcohol came up which was nothing but a means of survival at that point of time.

We sat in a dhaba munching upon some snacks prepared by the gentleman who happened to own the place, along with our drinks, which truly acted as our saviour. After having had the couple of drinks and after feeling all charged up and warm having consumed the same, we decided to take a stroll down the mountains and do some casual trekking.

There were, by the way two reasons, why we wanted to do so. First, we wanted to experience the beauty on foot and second, we definitely wished to get back to our natural senses as we hadn’t realized that we had drank enough for both of us to have that feel good factor associated with the heavenly drink.

We took what can be called a self semi-Naini tour, borrowing the terminology used by most tourist operators in the area, the only difference was that we didn’t have a guide to give us company as it would have killed the self-exploration tendency that we all have.

It took us another 3 hours to regain our senses. By then it was already 3 in the afternoon and it was time to head back as we wanted to reach home before it got too late at night. We halted at a couple of dhabas en route. It was only around 10p.m. that we were able to enter our city.

Having dropped my friend to his place, as I drove back home, my mind seemed to have gone blank. With a couple of hours of sleep to my credit, my mind and body seemed to have stopped listening to me.

I straight away threw myself on my bed on enterting my house. There was this big smile on my face as one would normally see on the face of a satisfied and content person. As I closed my eyes, I wondered, when it would be next when I will get to experience what I had just done. 🙂