Chetan Bhagat is one guy who has inspired not only me but so many budding writers who wanted to write but could never take that courage to delve into the same, courtesy the kind of remuneration that the industry offers and courtesy the kind of success rate associated with the same.

His inspiration has not been limited to his breed and has instead gone much beyond the same, courtesy the kind of books he has written which has made a significant impact on the lives of so many, not only in India but also across the seven seas.

And one such person happens to be my very own sister-in-law (saali) who would soon get married to a Tamil guy, hailing from the same college as hers. Courtesy, 2 States, the world has become much more open to accepting the concept of getting married in a different caste, religion or region.

On my part, I am extremely excited that I would get a chance to witness the much awaited 2 States like wedding taking place in my in-laws house in a few days time. The concept of two families hailing from two totally different backgrounds and having totally different perceptions would be seen coming together to have a consensus on a common issue.

The excitement seems to have caught everyone in the family, with my brother-in-law even contemplating getting dressed in a lungi, similar to the likes of the bridegroom and my sister-in-laws all set to adorn kerala style sarees.

If this is not the real manifestation of unity in diversity, then I wonder what is! Wouldn’t it be amazing if the entire world could take a cue from such examples of unison and get motivated to drive away the enmity and conflicts evolving from regionalism?

Wouldn’t it be nice to see the next generation getting a chance to experience both cultures at home and imbibing values that are extremely essential when it comes to the unity and integrity of our country?

Being an ardent Shahrukh Khan fan that I am, I would want to see much more of such marriages taking place in our country.

May be what the government in our country and an amendment in the Special Marriage Act has not been able to accomplish so far, can be achieved by a concept which has become part and parcel of every person who happen to be living in this territory which we all refer to as India.

I am sure, you all must have heard this song from the movie Qayamat se Qayamat tak which became a rage the moment it hit the screen and made Aamir Khan a rising star, the chocolate boy who would soon conquer the Indian cinema in times to come.

What a journey it has been for the person hailing from a filmy family! As one would tend to imagine that the journey would have been a cake walk for the man, who of course had his godfathers in the industry.

But it was not to be. With the kind of defiant nature and a zeal to do things what was right according to him, the man treaded not so glorious a path. It was only after performances in movies like Dil hai ki maanta nahi and Sarfarosh that he was given his due recognition.

Even then, it was an era dominated by the likes of kuch kuch hota hai and DDLJ, and the Badshah was all set to charm the girls who would do anything after taking a vow over the kind of love that was depicted in his movies.

Things started to take a turn in a big way in favour of Aamir afterLagaan.Mr. Perfectionist, as he was being popularly called, started to assert his claim to thatnumero unoposition in Bollywood that had been previously held by the likes of Amitabh Bacchan and Shahrukh Khan.

All doubts regarding the box-office fate of his movies were soon dissipated and he was being considered a very safe and lucrative bet when it came to making money from movies.

With everything going in his favour, he surprisingly decided to restrict himself to a movie a year formula, going by his perfectionist nature, which was so contradictory to what most actors in the industry would have done at that time.

Critics warned him of his decision which according to them would prove to be a doomsday in the actor’s career. But God had surely scripted something very different for the man. Every movie that he did after became a super-duper hit. 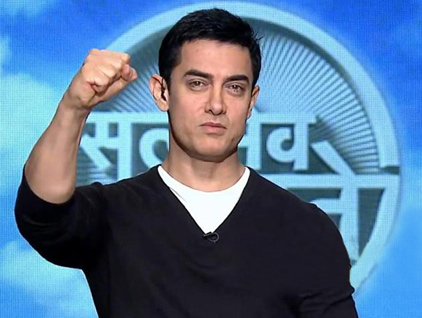 Today, I am sure, if he looks back at what he has done, he will surely be proud of the collection of movies that he can proudly claim to be his.

And when we were all wondering as to what’s next, he conceptualized a show which was about to hit the very foundations of our society, at the same time, bringing out into the open, things that would otherwise be left not talked about sheerly because of the taboo associated with the same.

Some people amongst us criticize the man for what he has done to his personal life by getting divorced and for the amount that he might be charging for a episode of Satyamev Jayate.

No matter what be the criticisms, this man has done something which is surely quite different from what others in his position would have done. After all, why would one want to face the wrath of the orthodox section in our society, considering that one would otherwise be living a very peaceful and luxurious life?

He indeed is a man, who is truly inspirational to the so many in our society and deserve all the praise and respect in the World for being the man he is.