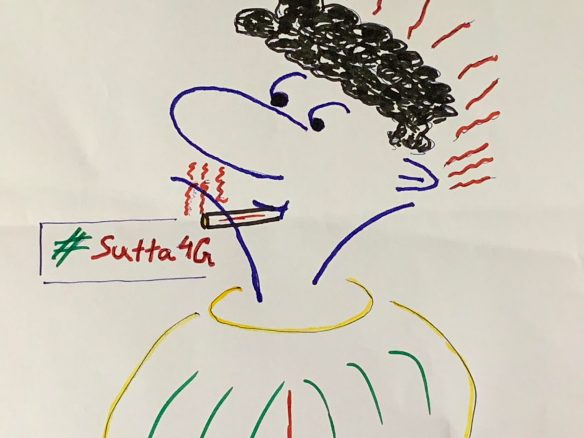 Source for the Image: https://www.facebook.com/Sutta4G/

There was a time, I remember, when most of the guys from my batch during graduation wanted to go to some foreign land, be it Europe, US etc. in search of a better life.

Don’t know whether it exists today as well, among the age group,

Though one thing that has continued to occupy the conversations among friends is to decide whether one wants to live in India or go abroad and settle down.

Somehow, the opinion seems to be divided, with those in favour suggesting:

Good money, as the pros of living abroad.

Difficult for parents to adjust, as cons among many others.

When in Rome, be a Roman, suggested some man, who found the wisdom in the saying, which doesn’t seem to work always.

As belonging to a nation or region, there is an ever pervading hangover associated with the interaction that one might have had with the person of the respective origin.

So strong at times are our biases, that it becomes very difficult to go beyond the generalisation and focus on the very person with whom we find ourselves interacting with.

It’s either religion or caste,

Either nationality or regionalism,

Either Asian or African looks, which tend to restrict our sensibilities.

In such an atmosphere, though preaching spirituality and the concept of vasudhaiva kutumbakam makes sense at a certain level, but might not be the immediate solution to the pervading issue.

In such a situation, does one really want to venture abroad and at what cost?

Leaving your loved ones behind, even if you take them with you, somehow becomes a pseudo life of sorts for them.

After all, what you need in life is probably:

Social companionship, in terms of your family and friends,

Few pieces of bread that one needs to earn for your loved ones,

A roof, for which one needs to pay rent or EMI for,

May be a good car, if you are too ambitious and are extremely passionate about driving in traffic, considering that there are enough Uber and Ola cabs on the roads.

Am sure, most of us, would be able to afford this.

It’s another discussion altogether if you or your wife are bent upon buying 2 dresses of Zara or such each every month :).

The only question that one needs to ponder over,

How much and why?

On a funny note, not a bad idea to conquer the entire world with your population and this might make the world one ;).

Source for the image: https://thecsspoint.com/reasons-for-foreign-policy-failures-by-mohammad-jamil/

Well, yes, to an extent, referring to the life led by the celebrities and the who’s who of their respective sectors and industries, but really to the world which is getting more and more explored.

The likes of Google and Uber have made sure that we reach the remotest of places, without the feel of getting lost in the wilderness.

No more a discovery of sorts, where there are roads, there are taxis and people treading on the same, where you can read about places on the internet.

The fantasies and the glitters of discovering something is an Uber or a Google away. The small joys of life are becoming much more obvious.

Accessibility has been redefined. Accessibility and explored nature have led to reduction in insecurity, at the same time, have affected the thrill and the charm which, once upon a time, was somewhat a synonym to exploration.

That reminds of me of companies being formed, whose sole purpose is to make your rendezvous with thrill in a secured manner, which, by the way, was a part and parcel of the very being that we all are.

The more the comforts, the more the monotony that seems to be creeping in all our lives. The pleasures which seemed to be so significant when we were all young, be it going to our grandparents place to going for a vacation, has become more an yearly routine to be a must take, so that we all can post our pics on the God of social media, facebook, to be liked by one and all.

Not getting into the good and the bad analogy, just wonder, with lives getting more busy and we mortals losing the charm of discovery, whether to travel places, would mean more Skype calls, made in a day, in times to come?